Histamine in migraine and brain

Histamine in migraine and brain.

Histamine has been studied in both health and disease since the initial description a century ago. With its vasodilative effect, it was suggested early on to be involved in the pathophysiology of migraine. Over the past 25 years, much has been learned about histamine as a neurotransmitter in the central nervous system. The role of this neurotransmitter system in migraine has not been previously reviewed.

Discuss a potential role of the brain histaminergic system in migraine.

Unstructured literature search with a no specific hypothesis-driven approach.

There is substantial evidence that systemically given histamine may elicit, maintain, and aggravate headache. The mechanisms for this are not known, and histamines do not penetrate the blood-brain barrier (BBB). However, circulating histamine may influence hypothalamic activity via the circumventricular organs that lack BBB. In the rat, prolonged activation of meningeal nociceptors induced by dural mast cell degranulation has been observed. Subcutaneous injections of N-alpha-methyl histamine, a catabolite of histamine with high affinity to the histamine H3 receptor, probably have some migraine preventive effect. A negative feedback on histamine release from mast cells in proximity to C-fiber endings has been a postulated mechanism. Most antihistamines have shown to be ineffective as acute medication for migraine. Two centrally acting potent H1 receptor antagonists (cinnarizine and cyproheptadine) have been reported to be efficacious in preventing migraine. However, the proof for this is limited, and their efficacy has been ascribed other actions than the antihistaminergic. In general, lack of specificity and side effects limit the potential use of centrally acting H1 and H2 antagonists. Brain histamine is synthesized by neurons that are restricted to the posterior basal hypothalamus, more specific to the tuberomamillary nucleus (TMN), and that project practically to the whole central nervous system. The posterior hypothalamus is a suspected locus in quo in several primary headaches. Recently, a positron emission tomography study performed in the prodromal phase of migraine attacks supported the idea of initial involvement of this area. In another recent study, the thalamic nuclei receiving trigeminal output was also shown to have direct connections with the ventral TMN. The central histaminergic system plays an important role in the complex sleep-wake cycle, promoting cortical excitability during wakening and attention, and it consolidates the wake state. The period of the day, in the evenings and during the night, when there is reduced susceptibility for migraine attacks corresponds with less central histaminergic firing. Activation of both the H3 and the H4 receptor promotes inhibitory actions on neurons. The H3 receptor causes autoinhibition of the histaminergic neurons themselves, and centrally acting H3 receptor agonist prodrugs have shown to both inhibit neurogenic inflammation in dura, to induce sleep, and to produce antinociception. There are no registered ongoing studies on H3 and H4 receptor ligands in migraine.

The role of the central histaminergic system in migraine is largely unexplored, but findings from preclinical research may be linked to several aspects of the disorder. The histaminergic system of the brain may play an important role, especially in the initial phase of an attack, and histamine H3 and H4 receptor ligands may potentially have migraine prophylactic properties. However, the basis for this is still circumstantial, and the evidence is lacking. 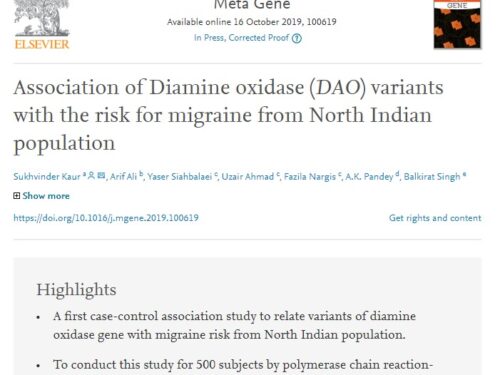 Prev
Next
Change Location
To find awesome listings near you!