Can you be allergic to alcohol? – Infosalus.com 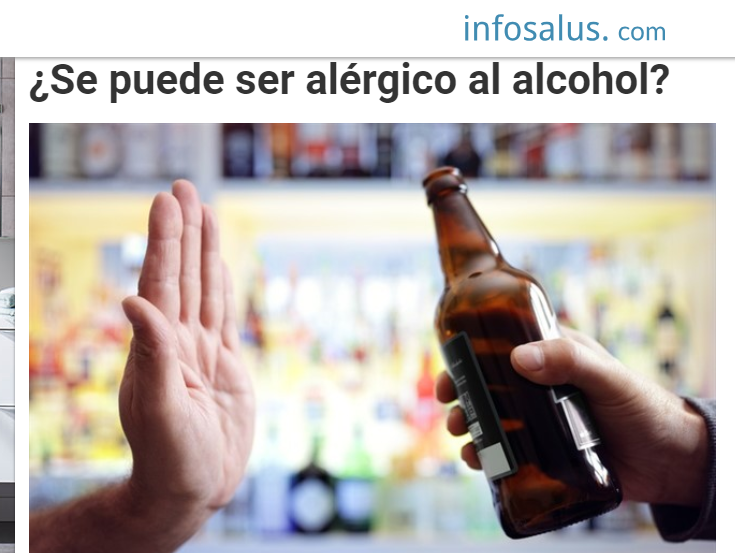 From the Spanish Society of Allergology and Clinical Immunology (SEAIC), Dr. Pedro Ojeda in an interview to the Media Infosalus indicates that there is a clinical non allergic picture, hereinafter referred to as ” non-allergic histaminosis” or “DAO deficiency”, in which alcohol inhibits the function of the intestinal enzyme diamine oxidase (DAO), causing symptoms such as pseudoallergics itching , redness, abdominal pain and migraine.

If this enzyme is deficient, and in addition is inhibited by alcohol, the person who suffers from this disorder can manifest symptoms pseudoallergics to alcohol consumption, such as itching, redness or abdominal pain” – Dr. Pedro Ojeda of the Spanish Society of Allergology and Clinical Immunology (SEAIC).

In the  non-allergic histaminosis produced by DAO deficiency, symptoms appear over time as a result of the silent accumulation of histamine and its effects in tissues and organs. On the other hand these non-allergic reactions can affect people of any age range, although they tend to occur in middle-aged and older.

Dr. Ojeda points out that “in the case of  non-allergic histaminosis, the symptoms are usually skin redness, itching skin, and sometimes migraine and hangover.”

For the treatment of this symptomatology, the expert of the SEAIC recommends “avoid alcoholic beverages. There are products on the basis of exogenous Diamino Oxygenase that help alleviate the situation.”

Get more information about DAO deficiency, the effects of food histamine and in which food is present.

Prev
Next
This site uses its own and third-party cookies to facilitate navigation, obtain information on statistics, behavioral and advertising purposes and share our content on social networks. We need your consent to install our cookies, if necessary you can revoke it or change your preferences. For more information about the cookies we use, read our cookies policy.AcceptDismissCookies policy