Publications in the media

25 March, 2015by dr-healthcarenewsPublications in the media

Progress on the deficit of the enzyme DAO 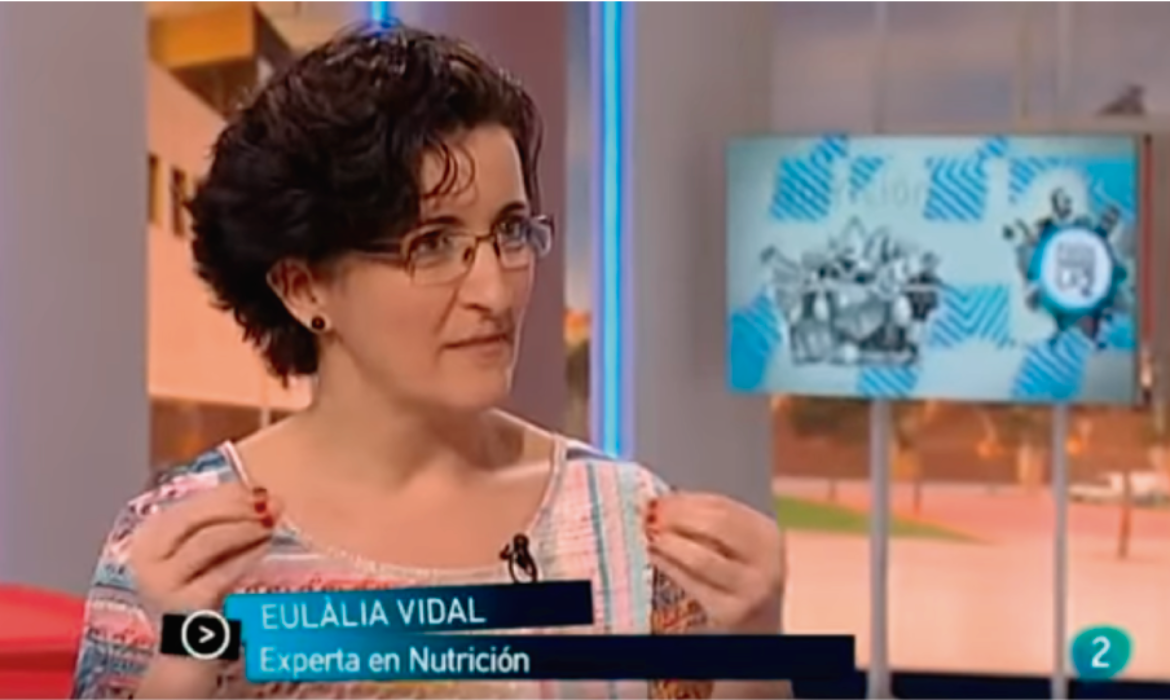 Eulàlia Vidal, expert in nutrition, speaks about foods that can generate adverse reactions in pleople with histamine intolerance, a molecule that acts in the organism as an hormone and a neurotransmitter and can cause some pathological symptoms. (@paratodosla2 18/02/2015)

The intolerance to histamine is directly related to the deficit of the activity of the enzyme that metabolizes it: the enzyme diamine oxidase (DAO). The deficit in its activity triggers the symptoms associated to the DAO deficiency, among them: migraine, vascular headaches, muscle aches, gastrointestinal disorders, fibromyalgia, dermatitis, etc.
Read More 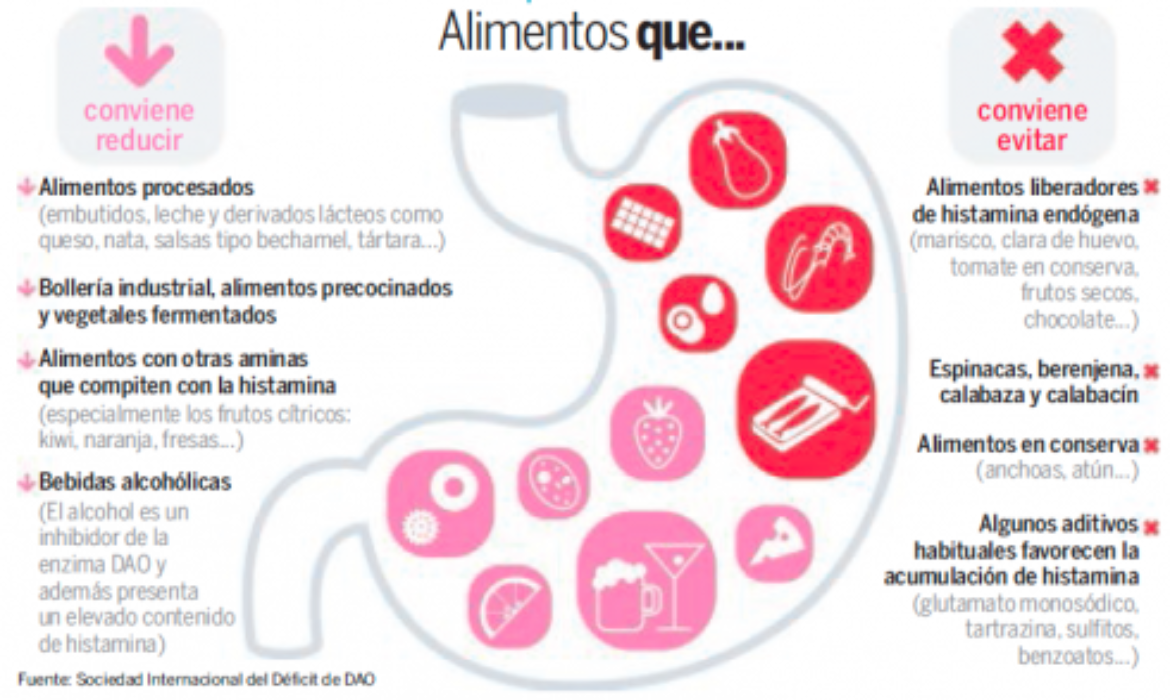 6 April, 2014by dr-healthcarenewsPublications in the media

Intestinal ailments by the deficit of an enzyme? Publication in the journal to Your Health The 6 April 2014 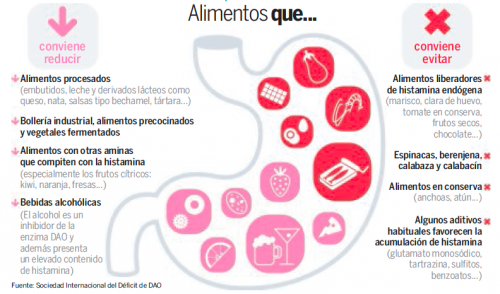 The lack of Diamine Oxidase (DAO) means that it is not metabolized well histamine, a molecule present in dairy products, seafood or tomato. Their accumulation in the blood causes constipation, diarrhea or bloating, according to the experts… Read more, access the pdf.
Read More 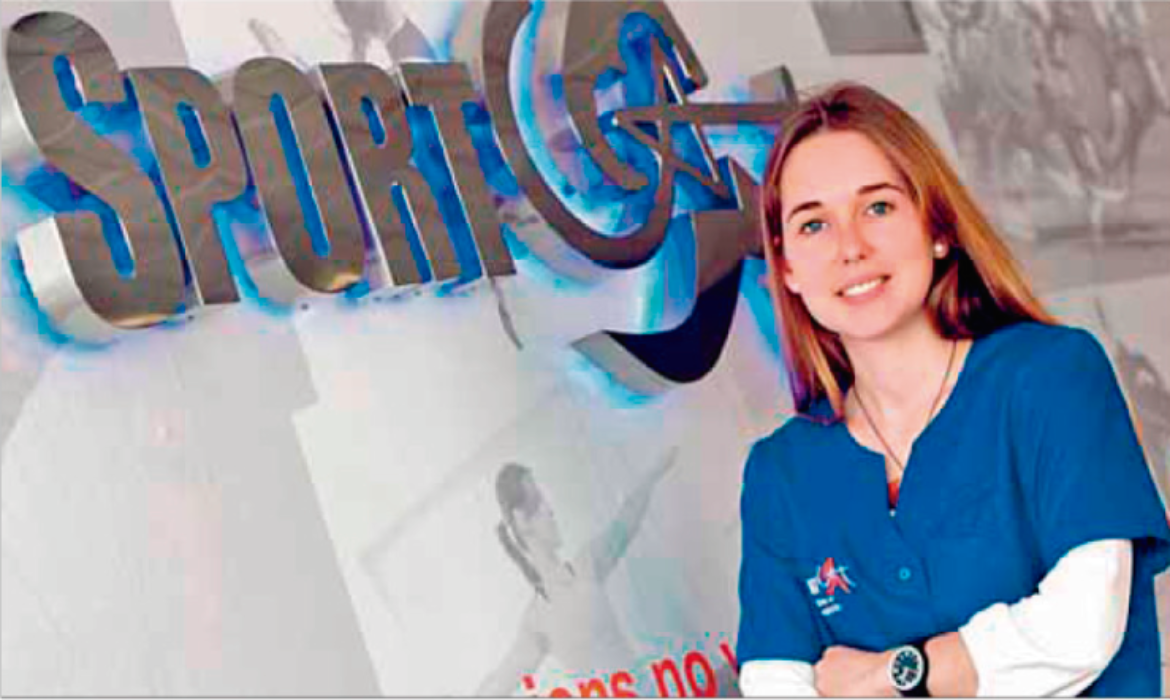 31 March, 2014by dr-healthcareInterviewsnewsPublications in the media

“The future is the prevention through nutrition” Interview to Adriana Duelo, Nutricionist and Specialist in DAO Deficiency. Publicated in El Punt AVUI, monday 31 march 2014 by Gemma Busquets 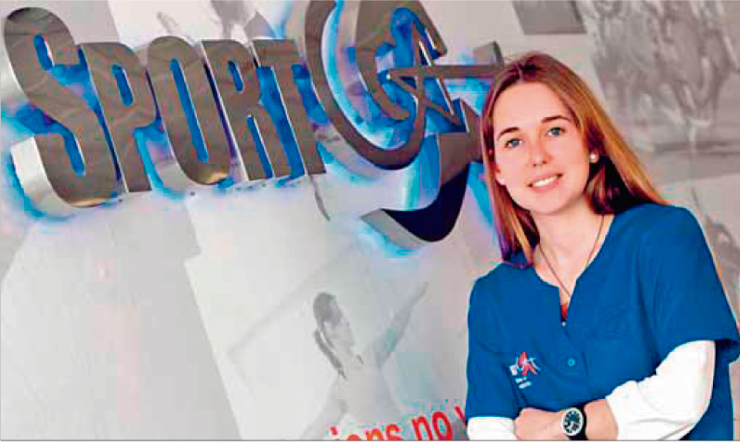 “The future is the prevention through nutrition” Interview to Adriana Duelo, Nutricionist and Specialist in DAO Deficiency. Publicated in El Punt AVUI, monday 31 march 2014 by Gemma Busquets. Access the pdf
Read More 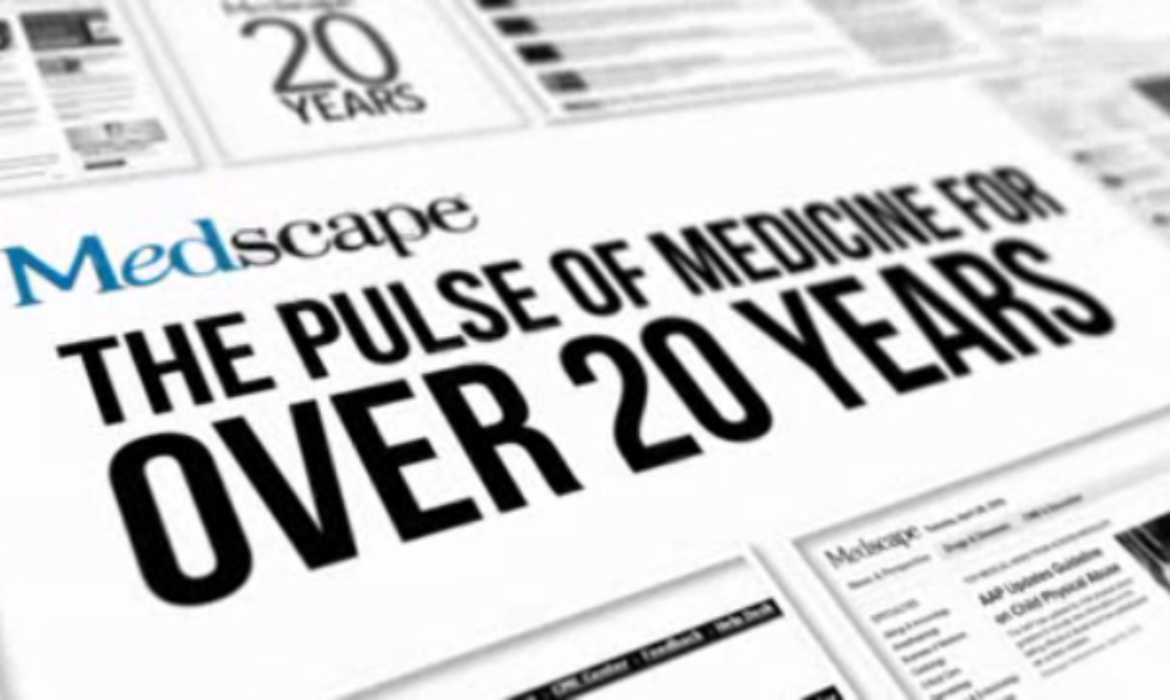 1 October, 2013by dr-healthcarenewsPublications in the media 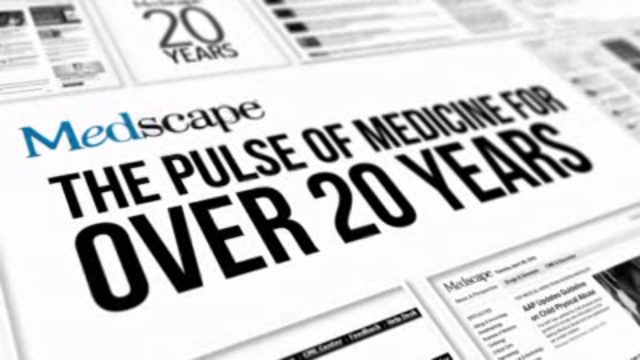 VIENNA, Austria — Preventive treatment with diamine oxidase (DAO), an enzyme that degrades histamine, significantly shortened the duration of migraine attacks and trended toward reducing the number of episodes. Histamine is present in many foods, is released in allergic reactions, and is one of the chemical mediators that contributes to migraine. About 25% of the population may have an alteration in DAO that decreases its activity in breaking down histamine. The enzyme is expressed most in the intestine, kidney, and placenta.

“We diagnosed 137 patients who have a migraine, of whom 119 showed deficits of the activity of the enzyme, around 87% of the total patients that we have studied,” said Joan Izquierdo, MD, from the Faculty of Health Sciences at the International University of Catalonia and the neurology service at Catalonia General Hospital in Barcelona, Spain.

He said normal enzyme activity is a score of at least 80 histamine-degrading units [HDU]/mL. Read more… 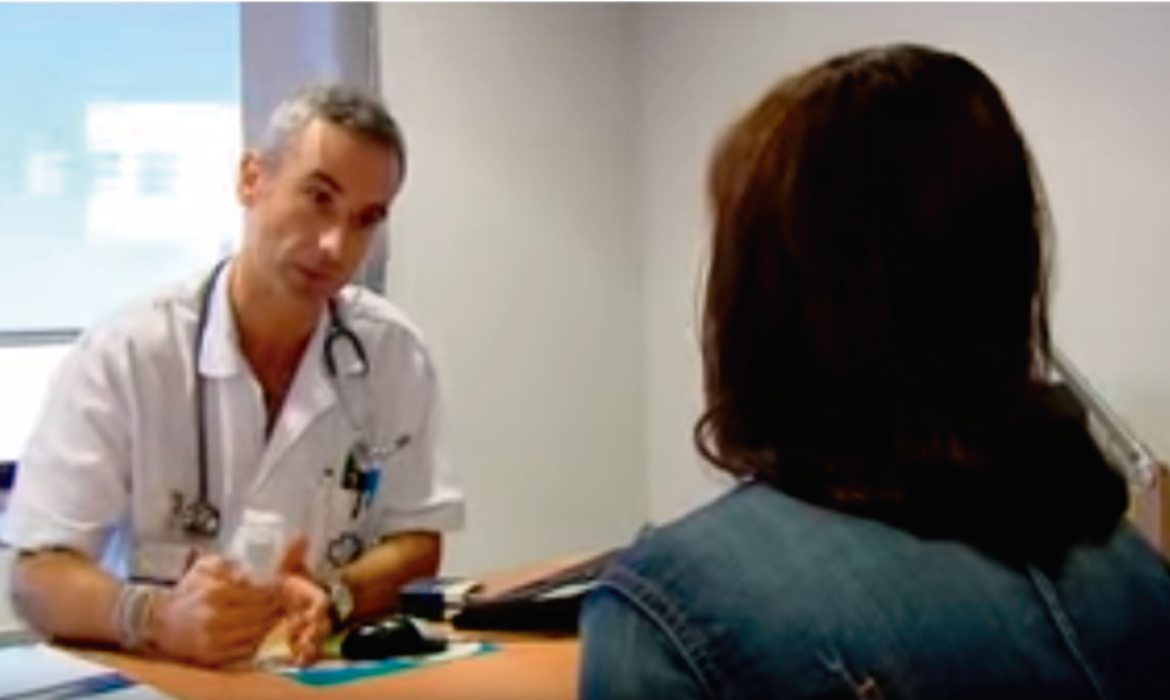 The enzyme Diamine Oxidase (DAO) can prevent the 90% of migraines

It has been presented today during the World Congress of Neurology in Vienna the study that relates the majority of cases of migraine with the shortage of the enzyme that metabolizes the molecule histamine. This finding opens the door to the preventive treatment using a dietary intake with the enzyme diamine oxidase (DAO). The research, developed by a team of the Hospital General of Catalonia, analyzed the response of two groups of patients with chronic migraine: one supplied with a contribution of the enzyme diamine oxidase (DAO), while another was simply a placebo.

“It has been shown that the people who took the diamino oxidase enzyme supplementation, the difference, the improvement, was significantly different from those who took placebo, which confirms that a diet with a DAO supplementation had a greater effectiveness than a simple placebo,” explained today to Efe The neurologist Joan Izquierdo, director of the research.

If you want to know more about DAO deficiency, its symptoms, origin and treatment please clic this link.
Read More 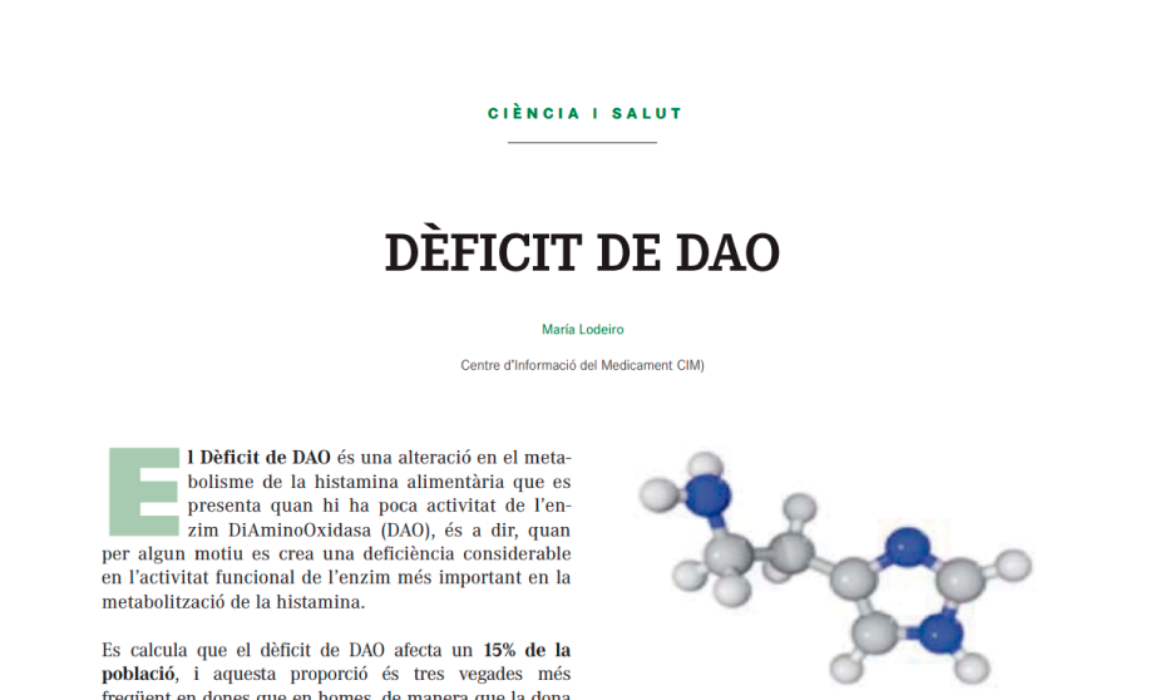 28 April, 2013by dr-healthcarenewsPublications in the media 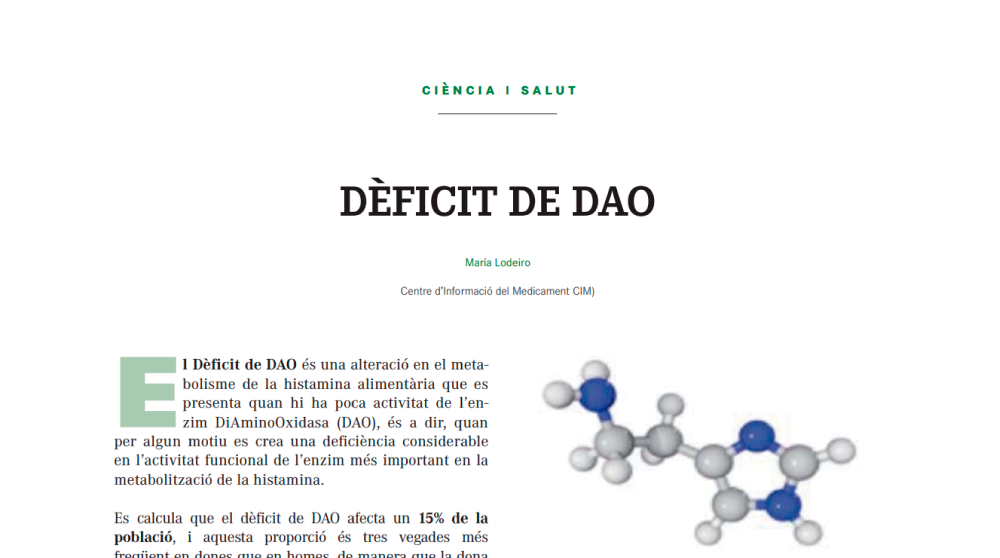 It is estimated that the DAO Deficiency affects 15% of the population, and that this proportion is three times more common in women than in men, so that women have lower genetical activity of  DAO.

In adults the predominant symptom is a migraine headache, followed by gastrointestinal disorders such as constipation, diarrhea, bloating, or satiety sensation of swelling, dermatological disorders such as dry skin, dermatitis or psoriasis, muscle aches and chronic fatigue.

24 May, 2010by dr-healthcareHistoricalnewsPublications in the media

On 24 May 2010 in the Medical Journal of neurology (a publication of GlaxoSmithKline and SANITARIA 2000 – with the support of Spanish Society of Neurology) presented the topics addressed during the day to raise awareness of migraine and other vascular headaches, held in the Congress of Deputies of Spain. On this day had presence personalities from the worlds of politics and national and international medicine as the European Federation of Neurological Associations`s president, Mary Baker, or the member of the European Parliament Nessa Childens, also member of the European Parliament Committee on the Environment, Public Health and Food Safety.

In this way it became apparent the institutional , the international community and the scientific community support to join efforts and promote research and protocols on migraine and other vascular headaches, in order to lay their biological bases as well as their correct diagnosis, treatment, and prevention at the clinical level.

In the field of research at the clinical level, were presented the main findings of the study MIGRADAO (which has had its continuation in the study MIGRADAO 002), apioneer clinical study at the global level in Nutritional Medicine and DAO deficiency/Migraines, and that was promoted by the Spanish Association of patients with headache (Aepac) and the Spanish laboratory DR Healthcare, specialist in the treatment of the DAO deficiency symptoms.

The main research was directed by Carmen Vidal, Professor of Nutrition and Bromatology at the University of Barcelona, and its results showed a significant relationship between deficits of the enzyme diamine oxidase (DAO) and the emergence of migraine attacks by accumulation of histamine derived from the diet.

Histamine is a molecule that is present in all foods of the daily diet, and is metabolized mainly at the level of the intestine and in blood by the DAO enzyme . The histamine presents different vital functions and physiological and pathological effects throughout the body, but their involvement in the migraine is associated with its capacity to produce neurological disorders at a cerebral level.

Also, on the occasion of this day, there were numerous new projects both in the scope of the Members of the European Parliament and the working life of affected patients. In addition, the European Headache Alliance (EHA) presented his “Manifest of Madrid on headache and migraine” which follows the previous protocols of the Declarations of Rome and Amsterdam.

The latter was signed in December 2009 and laid the basis for a greater involvement of the patient in the treatment of headache as well as a better patient-physician communication as pathways necessary for effective management of these ailments.

In addition, this Dutch city, highlighted the importance of the attention of migraines by a multidisciplinary team, which appears as the more effective care in terms of cost-effectiveness. Finally, another of the conclusions which were distilled on that occasion was the need for the multidisciplinary team is properly trained and that there is greater communication between doctors themselves.

The Manifest of Madrid, which has been presented at the Congress of Deputies in a session opened by Gaspar Llamazares, medic and in that time diputie for Asturias and Madrid in the General Courts of the Spanish Parliament, involves an appeal to all European politicians to make the investigation of this disease a priority.

“The migraine should be strongly taken into account in the political agenda,” said Audrey Craven, President of the EHA (European Headache Alliance ).

In it was stablished that migraine is a neurological disorder of the brain, which is recognized by the World Health Organization (WHO) as the 12th leading cause of disability and that involves a cost to the European economy of 27 billion euros a year. And it is that migraine affects more than 80 million people in the world and nearly five million in our country. Hence the need to carry out policies of action jointly by all countries.

With the objective to determine the access of patients to the assistance, the EHA conducted a survey in which 84 percent of respondents were female and 16 percent male. Some of the data that it throw is that although in almost all countries in which this survey was conducted there are doctors and specialized centers, the majority of respondents considered inadequate the assistance. Despite the fact that the reasons are varied, in general most makes reference to the fact that migraine is not considered as a “true disease.”

In addition, revealed that 60 percent of respondents are not satisfied with the management and treatment of migraine, considered to be ineffective treatments, little information on how to use them and difficult access to specialist. Another fact that emerges is that only an eight percent have access to specialist and the patient takes an average of 12.8 years to be aware of the existence of a specialized center.

This discontent rises in Spain to 81 per cent.

In the following links you can access the original article published in Medical Journal of Neurology, or download the pdf through here. Get access also through these links to more information about the DAO Deficiency, its origin and the presence of histamine and other biogenic amines en different types of foods.