At the forefront of technology 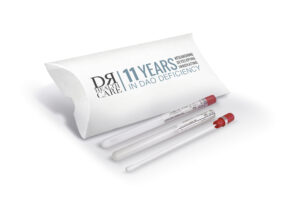 The genetic test developed by the Molecular Genetics Laboratory Genyca introduces the possibility of a non-invasive genetic study of the DAO activity. This is a test that performs a high sensitivity genotyping of the most relevant genetic variants of the AOC1 gene (DAO) on the basis of a saliva sample (buccal mucous).

Advantages of the genetic testing of the DAO activity:

DAO deficiency is characterized by an imbalance between the quantity of food histamine and the capacity of degradation of the same. The diamine oxidase (DAO/ABP1, Histaminase) is one of the two enzymes responsible for degrading the histamine. In particular, the DAO is responsible for deleting the extracellular histamine after the liberation of mediators (1). A malfunction of the catabolism of histamine results in the accumulation of high levels of this, causing multiple disorders, such as gastrointestinal symptoms, headache, migraine headaches, allergic rhinitis, atopic skin, wheezing, asthma-type and, less frequently, fibromyalgia, cardiovascular symptoms, hives, ADHD (Attention Deficit-Hyperactivity Disorder) (2).

Aplication of the test

Approximately 12% of the population suffers from Deficit of DAO, being more prevalent in women than in men(3). The deficit of DAO activity is associated with a lower capacity of degradation of histamine ingested in the diet.

One of the most recognized consequences of this metabolic disorder is migraine: despite its multifactorial etiology, evidenciadoque the deficit of DAO relates to the emergence of migraine (4-5). It has also been associated with the genetic variant p.T16M to an increased risk of hypersensitivity to NSAIDS ( nonsteroidal anti-inflammatory drugs), having been proposed as a biomarker of clinical response (6).

Description of the methodology

The DNA from the sample is obtained through automatic extraction, later performed a reaction of amplification by Polymerase Chain Reaction (PCR) multiplex of regions of interest of the AOC1 gene by using specific primers. The analysis of gene variants of interest is performed using SNPE Multiplex (Single Nucleotide First Extension) and subsequent analysis of fragments.

Gene variants incluided in the test

Serum levels of DAO expression present great interindividual variation. The gene that encodes the protein DAO/ABP1 is the AOC1 gene, for which have been described variants of type SNP (Single nucleotide variants), some of which are associated with reduced levels of DAO activity  (7-8). In this test analyzes 3 allelic variants of AOC1:

Classification of variants according to the recommendations of the American College of Medical Genetics and Genomics (10), and according to nomenclature of HGVS (11).

Report of the results

Certain combinations of the variants analyzed are associated with a genetic deficiency of DAO activity. In the report of results are specified the variants detected in the patient, as well as the phenotypic interpretation of DAO reduction of activity based on the results obtained.

GENYCA is a laboratory certified by the UNE-EN-ISO 9001:2015, which performs genetic analysis through procedures and validated protocols and recommended by the European Network of Quality of Molecular Genetics (EMQN). Our analyzes are validated according to international guidelines (9) and comply with all technical and methodological requirements listed in the accreditation standard UNE-EN-ISO 15189: 2012, and participates regularly in external quality controls.

10. Richards et al. (2015). Standards and guidelines for the interpretation of sequence variants: a joint consensus recommendation of the American College of Medical Genetics and Genomics and the Association for Molecular Pathology. Genet Med 17:405–24.

For more information about the genetic test please contact us through this form: