The causes of the metabolic dysfunction

The main cause of the enzymatic dysfunction has a genetic origin

Some people have or produce few Diamine Oxidase, this is reason why until recently several chronic pathologies, such as migraine, were believed to be hereditary, when in fact, the hereditary factor is the deficiency of DAO.

Other causes may have their origin in drugs or other pathologies.

Clearly, genetics is one of the factors that causes DAO Deficiency. In the same family unit, its members share this deficiency and many chronic pathologies that until now were considered “hereditary”.

The genetic sequence of DAO enzyme is found in a fragment which is located on chromosome 7 (7q34-q36) of the human genome and is composed of 5 exons and 4 introns.

There have been detected many differences in the sequence of exons and introns of this gene that are due to their genetic polymorphism. In total, according to data from the National Center for Biotechnology Information (NCBI), there are 85 variants of a single nucleotide polymorphisms (SNPs) located and identified in the human gene of the DAO enzyme (AOC1). 17 of these SNPs are found in the exons, of which 7 produce replacement of amino acids, being candidates for cause alterations in the metabolic capacity of the enzyme.

Of all the polymosphisms found in the sequence of the gene AOC1, three of these polymorphisms (with reference: rs1015611, rs1049742 and rs1049793) produce low enzyme activity in the metabolism of histamine.

Carriers of this polymorphism present lower DAO activity than individuals non-carriers, being the significant the differences between their enzyme activity levels. Studies indicate that these polymorphisms related to a function reduction occur with a frequency of approximately 10%, especially affecting women.

Other polymorphisms of replacement of amino acids studied in the DAO gene do not show changes in its enzymatic activity. On the other hand, it has been associated with the variant p.T16M an increased risk of hypersensitivity to NSAIDS (Nonsteroidal anti-inflammatory drugs), having been proposed as a biomarker of clinical response to treatment for these drugs.

“Natural food products are complex mixtures comprising chemical substances, many of which have not a defined role in human nutrition yet. Most substances without known nutritional function which exist in products that we normally use do not seem to have harmful effects, or they may be present in such small amounts that they do not represent any danger to human health. Nevertheless, in some circumstances these substances may have damaging effects that must be taken into account. Some known substances found in fermented foods are not toxic in normal subjects, but they may be when the subject consuming the food is under treatment with certain drugs that are able to modify their metabolism within the organism.”

– 1981, Francisco Grande Covián, spanish doctor and researcher. His main work was in the area of nutrition and biochemistry, and was the founder and first president of the Spanish Society of Nutrition.

There is set of drugs involved in the deficiency or low activity of Diamine Oxidase enzyme. They block or inhibit enzymes involved in the metabilization of histamine, DAO in particular, or release endogenous histamine. This is a very significant risk, as over 90 drugs have been reported to be involved, many of them widely used. It has been estimated that 20% of the population use some of these drugs, increasing the risk of suffering symptoms or pathologies derived from histamine accumulation.

In pathologies such as migraine, an effect of the consumption of these drugs may be the chronification of symptoms, as most drugs prescribed to palliate the effects of the illness are DAO inhibitors or endogenous histamine-releasing drugs. 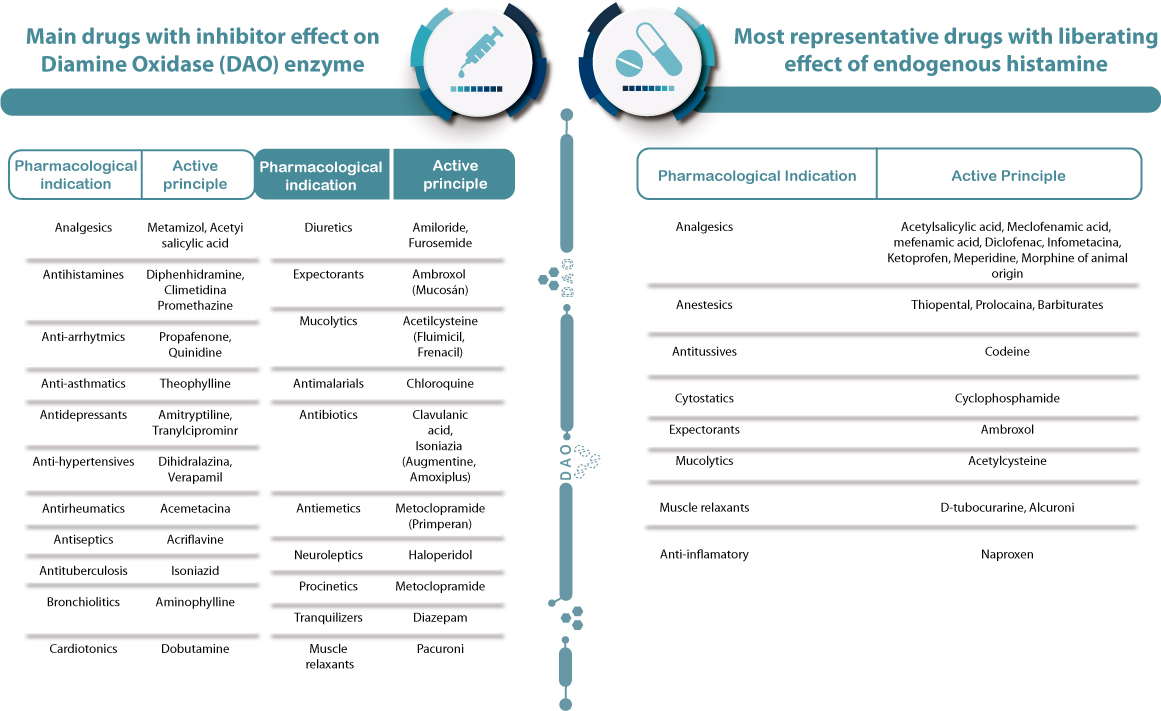 DAO Deficiency seems to be more prevalent in population with inflammatory bowel diseases.

Ulcerative colitis and Crohn disease, pathologies that cause DAO Deficiency, are always monitored when developing any clinical study related to endogenous histamine accumulation. Normally, when distributing patients in controls and patients with DAO Deficiency, those subjects with inflammatory bowel diseases are usually excluded.

DAO Deficiency has also been demonstrated in postoperative bowel, also seen after chemotherapy treatments. Diamine Oxidase is mainly located in the small bowel and if the mucosa decreases, so does the enzyme production area.

In Crohn’s disease (CD) patients, where DAO activity in the intestinal bowel is reduced by 50% regarding healthy population, a higher recurrence rate of the disease has been observed after surgery (mainly in those with low enzyme activity). Therefore, DAO could be a useful marker to foresee recurrence risks or complications in CD.