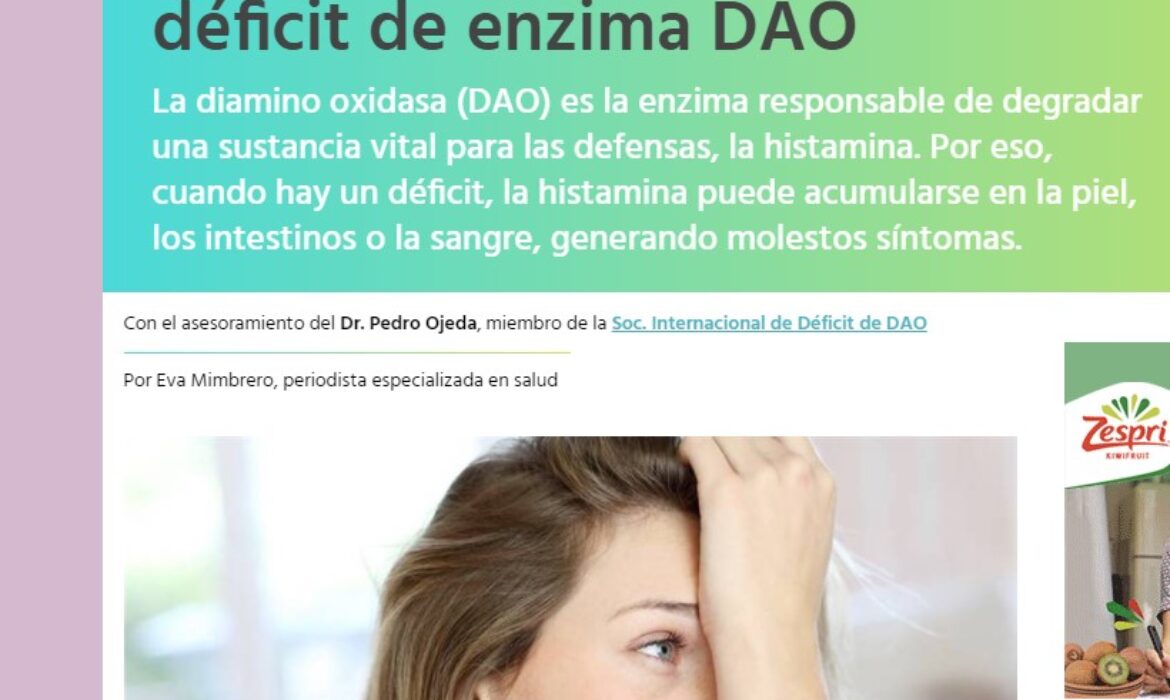 23 October, 2020by adminnewsPublications in the media

On October 23rd the magazine SABER VIVIR tve published an article about the DAO deficiency, its causes and management called “Migraine, itching, stomach pain… This is how DAO deficiency affects you”.

It is signed by the journalist specialized in health Eva Mimbrero and has the advice of the allergist Dr. Pedro Ojeda, co-director of the clinic Ojeda of Asthma and Allergy and a member of the International Society of Deficit of DAO.

The article begins by explaining what the histamine molecule is, what its sources are in the organism (since it is produced and stored in certain cells, and can also be acquired through food in the case of a deficit of DAO) and what physiological functions it performs, among which are the secretion of gastric juices, processes of the immune system, neurotransmission in the nervous system, among others.

Which systems are affected?

Among its symptoms at the neurological level is migraine (87% of people who suffer from migraine have a deficit of DAO, according to a clinical study conducted in Spain), at the skin level itching, redness, emergence of beans, hives and angioedema, at intestinal level gastric pain, cramps, gas or diarrhea, at gynecological level menstrual pain, at cardiac level palpitations, arrhythmias or tachycardias, and at respiratory level rhinitis and the feeling that it is difficult to breathe.

Which are the causes?

Before going on to talk about methods for the dietary management of the symptoms of DAO deficiency, it is emphasized that DAO deficiency is not an allergic response but that its effects and control are more prolonged over time, being more durable and less instantaneous processes.

Finally, the article identifies the main causes of DAO deficiency, among which are the genetic alteration in the individual’s DAO enzyme, certain inflammatory intestinal disorders that alter the intestinal mucosa where DAO is produced (such as celiac disease, Crohn’s disease or ulcerative colitis), the consumption of certain drugs that inhibit the enzyme, or the consumption of alcoholic beverages, since alcohol also acts as a potent inhibitor of the enzyme.

How to handle it?

Once these causes have been identified, it ends up talking about the management of the symptoms, in which its three fundamental pillars are the diagnosis of the specific cause in each patient, avoiding the consumption of alcohol and certain foods rich in histamine, as well as keeping a medical control of the drugs that are consumed, and finally following a dietary supplementation of diamond oxidase.