Biogenic amines, including histamine, are formed in food by the action of microorganism decarboxylase enzymes from amino acid precursors. This event does not occur in natural or physiological amines, which are formed during metabolic processes of plants and animals.

Possibility of alternative biosynthetic routes and combined participation of different types of microorganisms and their possible interactions makes it more complicated to determine the exact responsibility of amine biogenesis in food.

Therefore, for histamine to grow in food specific requirements are needed:

Foods are complex and consist of nutrients that require to be degraded from the moment they enter the oral cavity. Digestive organs carry out the digestion of food thanks to digestive enzymes that reach the intestinal tract through several digestive secretions (salivary, gastric, pancreatic, intestinal and biliary) obtaining the nutrients required for the proper functioning of the organism.

Histamine, which is present in every food (of animal and plant origin), should be metabolized in order to be eliminated by urine without problems. Note that exogenous histamine does not have a functional role within the organism, and for this reason, it is eliminated without using any property.

There are two known main routes of histamine metabolism in living beings, where Histamine N-methyltransferase (HMT) and Diamine Oxidase (DAO) are implicated:

Degradation by Histamine-N-metyltransferase (HMT or HNMT)

HMT is an enzyme that degrades histamine in the liver tissue, but it is also present in lower quantity in other tissues. Many studies establish a small relation of HMT in histamine metabolism in intestinal mucosa, as its activity is almost insignificant compared to DAO activity.

It is a cytosolic protein and therefore, it can only convert histamine in the intracellular space of cells. This proves that its capacity to degrade histamine is lower than the Diamine Oxidase route, which has a role in inactivation and removal of extracellular histamine; and this confirms therefore that pathologies related to a high histamine concentration in blood, are associated with DAO deficiency and not with HMT.

DAO is the most important enzyme that degrades histamine, but it is only located in some tissues, specifically in intestinal mucosa, kidneys, placenta, thymus and seminal vesicles.

DAO also has little participation, not always, in the liver tissue. It is mainly located in intestinal epithelium, where it absorbs histamine (endogenous histamine too) and where DAO degrades it controlling the pass into portal blood. DAO located in liver controls the pass of histamine towards systemic circulation and when it is in the kidney, DAO degrades the reabsorbed histamine in the proximal tubule.

Other biological functions of diamine oxidase

Diamine Oxidase is the main enzyme that degrades ingested histamine. Moreover, when DAO acts like a secretion protein, it can be responsible for waste collection after extracellular histamine is released and, therefore, tissues containing DAO are decisive in the systematic control of histamine bioavailability.

Diamine Oxidase is involved in other processes such as regulation of cellular division or differentiation in rapid proliferation tissues (bone marrow and intestinal mucosa), and can act as neurotropic link.

In pregnant females, DAO activity is higher than in not pregnant, from 500 to 1000 times higher. Placenta produces additional DAO amounts as a fetus-protection measure, ensuring correct histamine degradation.

There are discrepancies on the criteria that helps consider food rich in histamine or not.

Some authors suggest eliminating from diet those foods with concentrations higher than 20 mg/kg, while other authors are more demanding and consider low histamine foods those with quantities below 1mg/kg. What is clear, however, is that the symptomatic dose is much lower in histaminosis than in toxicity, 15-20mg and 150mg respectively, since the tolerable dose in both cases is 100mg/kg.

Traditionally, research on histamine contents had been focused on foods related to histamine poisoning episodes, such as oily fish, but this is a mistake since its mechanism of rising histamine levels is different. They are sporadic outbreaks which affect general population as a result of unsanitary food effects.

Even so, in Europe there are some initiatives (ALBA, Allergen dataBAnk; TNO Nutrition & Food Research) that seek to provide an exhaustive database about histamine contents in food, due to the decarboxylation of its amino acid precursor, histidine. The downside of this data is that it can vary greatly from one food to another. Histamine and other biogenic amines concentrations in food are highly variable within the same family and even among two samples of the same product. 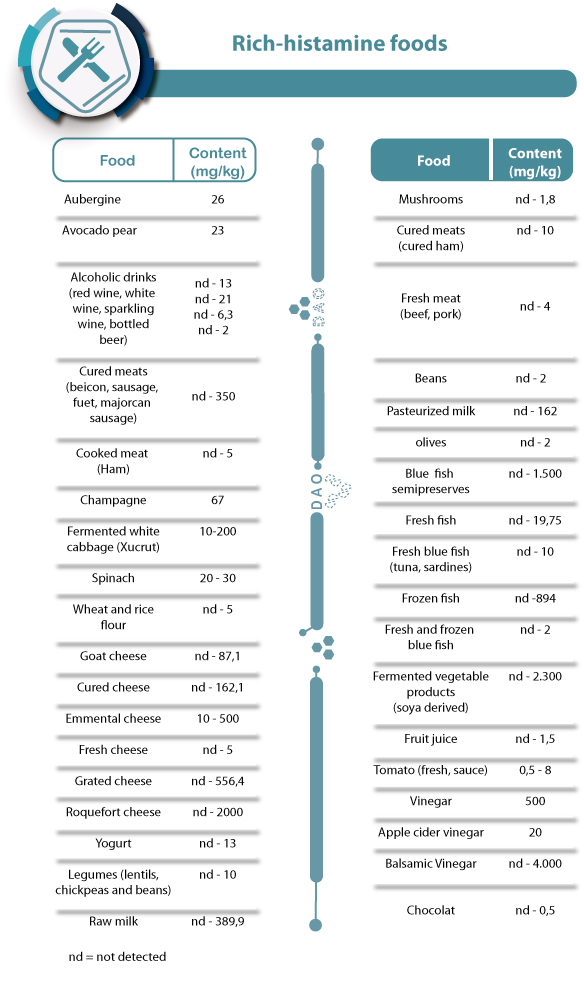 Values are not properly coincident in any food among different sources, since histamine amount varies depending on the fermentation degree. For this reason, it is difficult to define a specific value for each food product. In our diet, it is also difficult to keep only those foods with a {maximum of 20mg/kg, since every product contains histamine. Además de esta lista, están todos los alimentos que, sin ser ricos en histamina, influyen.

In addition to this list, we find all those food products that, without being rich-histamine, influence too. Those foods that easily get damaged microbiologically, such as meat and fish or products and drinks produced by fermentation and maturation, are likely to present high histamine values.

Foods rich in other amines

Apart from rich-histamine foods, in patients with low DAO activity the high intake of foods rich in other amines such as putrescine, cadaverine, b-phenylethylamine, tryptamine, serotonine, tyramine and agmatine can trigger DAO saturation, avoiding it to degrade ingested histamine properly.

The most competitive amines against histamine to be degraded by DAO are putrescine and cadaverine, since their degradation is quicker than histamine and they capture the enzyme faster. 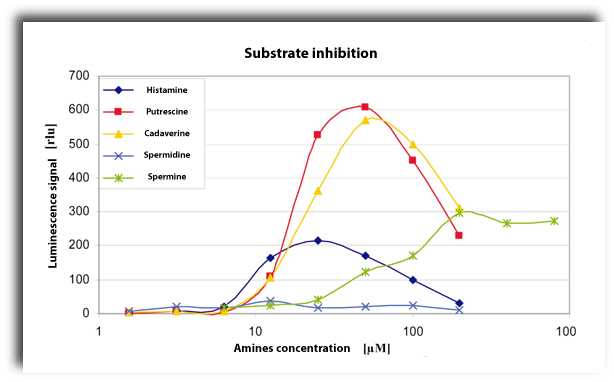 Amines amount can be different in each type of food, as in the case of histamine. Depending on the higher or lower presence of biogenic amines, food with the same histamime amount, could trigger symptoms or not.

Nevertheless, for symptoms not to appear, specific amounts for amines are established, indicating the maximum tolerable level, but they only refer to toxicity since values which relate the intake of foods rich in amines to DAO saturation have not been established yet.

This group consists of those foods that, without having great concentration of histamine orther amines, release endogenous histamine, it`s mean, histamine located in mast cells.

Several foods with this characteristic have been described: milk, cereals and egg white (particularly the milk protein).

The intake of endogenous histamine-releasing foods or drugs causes the same symptoms as rich-histamine food intake.

Prev
Next
Change Location
To find awesome listings near you!