Alteration in the metabolism of food histamine

What is DAO deficiency?

In healthy people, histamine from the diet is degraded by the enzyme Diamine Oxidase (DAO), however, in people with low activity of this enzyme there is a risk of suffering a plasma accumulation of histamine, referred to until recently as “histamine intolerance”. This term is a concept that we now consider simplistic once the extent of DAO deficiency and its greater prevalence in the population have become evident, since the increase in circulating histamine is not really caused by an intolerance but by a silent accumulation, with no temporal relationship between the ingestion of histamine foods and the appearance of symptoms.

When there is a disproportion between the histamine ingested or released by the cells that store it in the body, and the capacity to metabolize it, histamine accumulates in plasma and causes adverse effects. 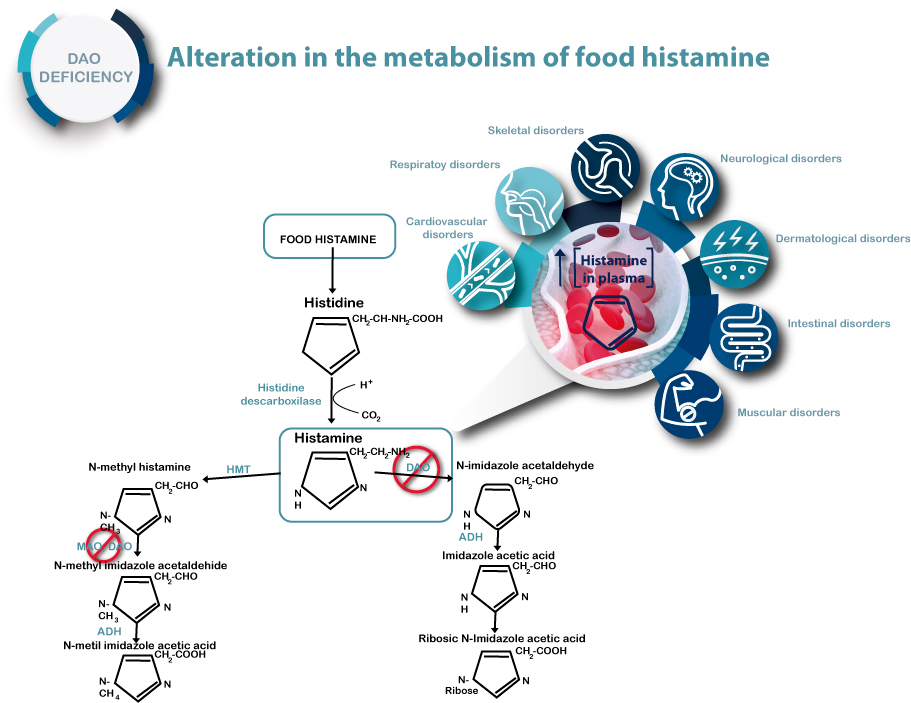 Unlike food allergy, the appearance of symptoms or adverse effects is not linked to the consumption of a specific food, but can be associated with a wide range of foods with varying histamine content, and symptoms may even appear after consumption of products with low histamine levels. This makes it difficult to establish a maximum tolerable dose. In fact, there is still no clear consensus on this value.

Variable amounts ranging from 50μg of histamine (in a 125ml serving of wine) to 60-75mg (by administration of pure histamine) are cited as triggers of DAO Deficiency symptoms. 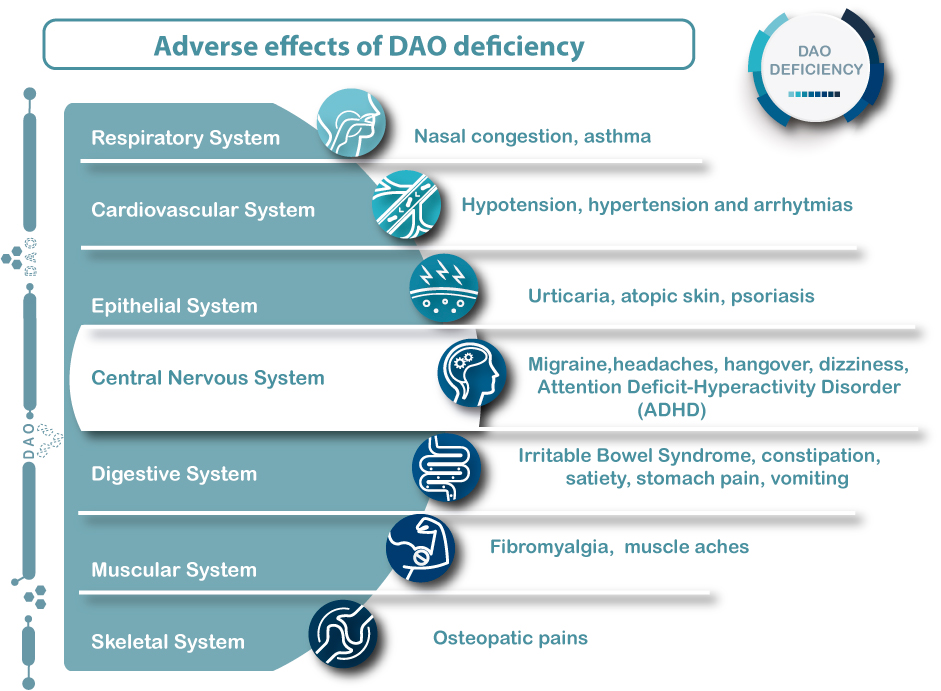 The great variety of symptoms derived from DAO Deficiency, which represent chronic pathologies of great prevalence in the population, demand that research in this field does not stop and progresses faster and faster in the knowledge of its origin and possible treatments.

Not all of the symptoms described above are necessarily present, but it is known that most patients with reduced DAO activity have an average of three of these symptoms, with migraine being particularly prevalent among them.

The most frequent symptoms derived from DAO deficiency are:

Histamine pathway in the body

At the time of histamine metabolization, when it has to be degraded by DAO to become N-imidazole acetyl aldehyde, there is an accumulation of the amine due to lack of enzyme in the intestinal mucosal cells. The low enzyme activity causes that a concentration considered normal of histamine from food cannot be metabolized and a transepithelial penetration of exogenous histamine occurs.

In this way, histamine passes into the bloodstream increasing its plasma concentration and once it is freely located in the blood, it is distributed to different parts of the organism.